The viewing conditions last night were not ideal, a lot of moisture in the atmosphere giving the sky a murky appearance. With the Moon not rising until 11pm I decided to point the camera at the Veil Nebula.  This object is based in the Constellation of Cygnus between epsilon Cygni and zeta Cygni.

Unfortunately I did not manage to get polar alignment quite right which resulted in some odd shaped trailing stars and I was not having the best of time with focus.  Using the AstroTrac, modded 350D and modded Sigma 70-210 @210mm this stack is the result of: 15 x 5min subs + Dark, flat and bias frames. Stacked in DSS and a little stretching in Photoshop CC. 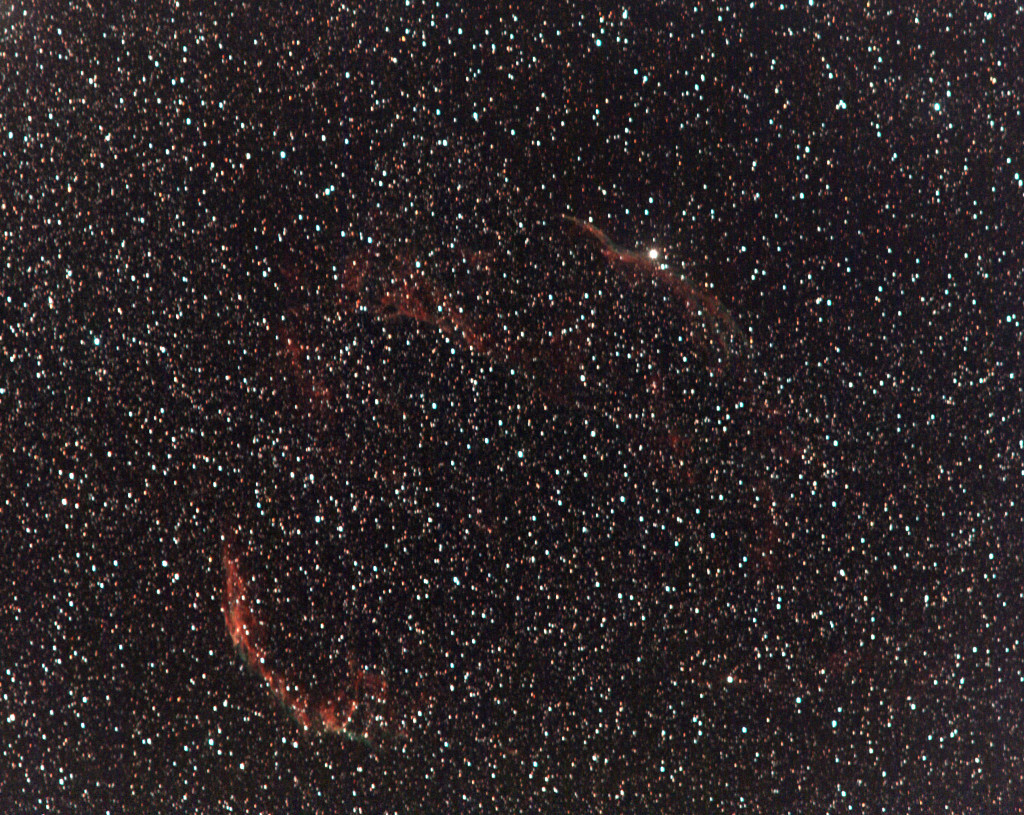 Well the other night the Sky was a little too murky for any sensible Deep Sky imaging so I rested the camera on the Fence and took a few photos of the Moon at 500mm. 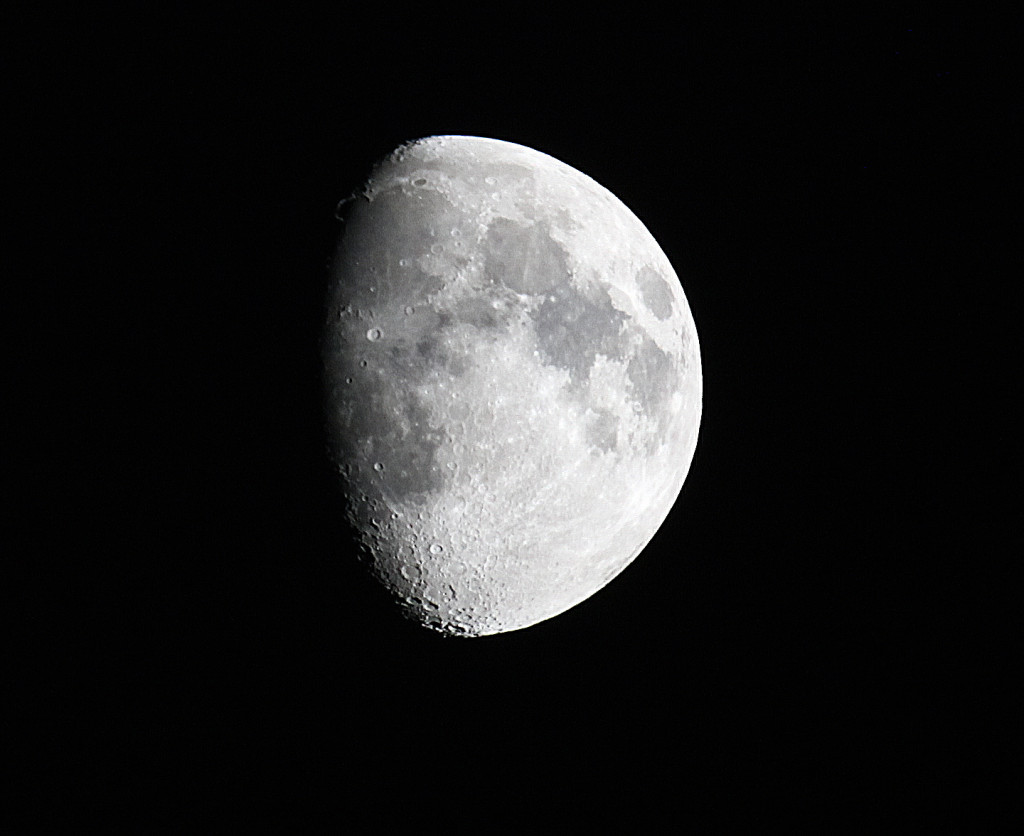 These 2 Nebula are located very Close to alpha Cygni (Deneb) the most famous star in the constellation Cygnus.  These two objects span some 3.7 degrees of sky and in dark sky regions can be easily seen using a good pair of Binoculars as a blurry smudge.  This image comprises of 11 x 5 minute Subs processed + Flat, Dark and Bias Frames and calibrated with DSS all taken using my Modded 350D and Astrotrac. The lens used for this image was an old modified  Sigma 210mm APO Zoom Lens. 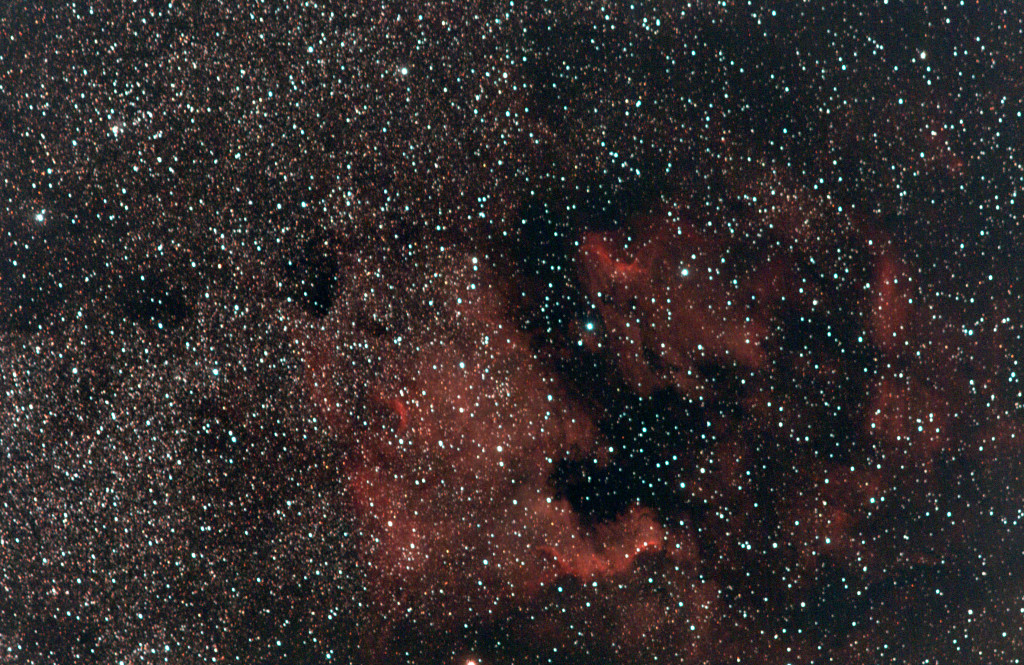 After quite a long break from imaging and a lot of fiddling I have dusted off the camera and AstroTrac mount.  Last night the conditions over Southampton were not too bad with only occasional broken cloud.  The setup for the night was my modified 350D and 500mm f/8 Catadioptric Tamron SP lens, mounted on the TT320X-AG mount.  The first of these images is NGC6888 (Crescent Nebula) consisting of  12 x 5min subs unguided.

Becuase of the amount of realignment required to get M31 (Andromeda Galaxy) on the sensor I had to drop the exposure time to 4mins as I had managed to move the polar alignment out by a tiny bit but I am pretty happy with the results.  This was 13 x 4min subs with dark, flat and bias frames. The focus is a tad out but I figured that this was pretty good considering it was my first night attempting to use this camera lens to do some astrophotography. 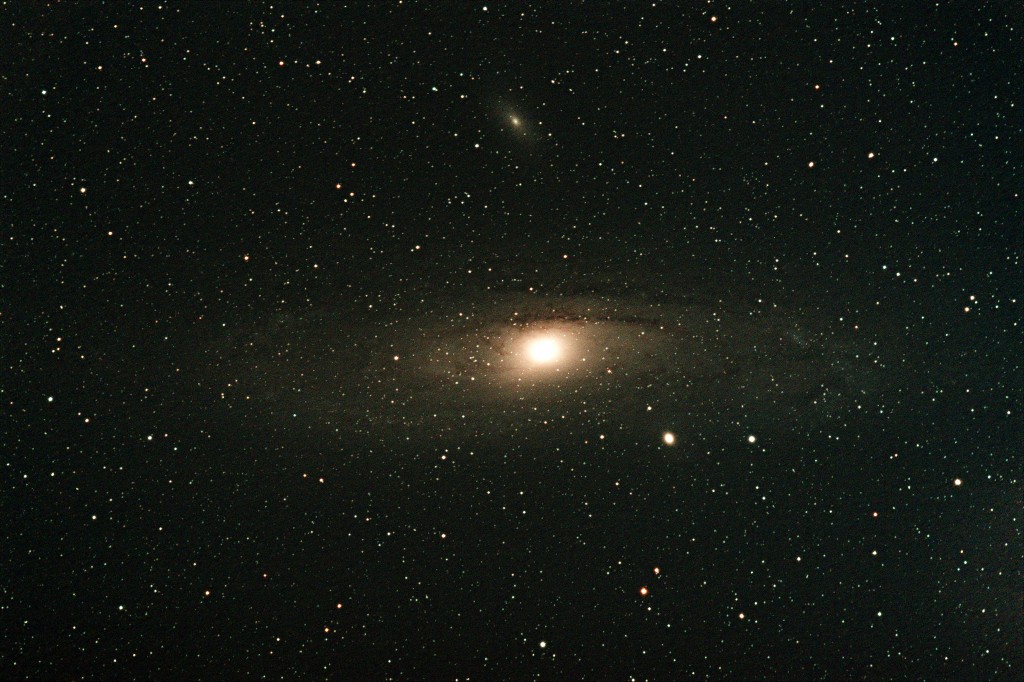 Over the past months I have had to re-evaluate my imaging set up which has resulted in me getting an AstroTrac TT320X-AG.  This has come due to a number of factors, firstly I only have a small garden 3.5m x 8m so setting up either the LX200 or ETX105 takes up alot of space, secondly the area that I live in suffers greatly from light pollution not only from a street light at the end of the footpath at the end of the garden but also my local train station.  Admittedly the street lighting has been changed to the new low energy lamps which greatly reduces the Sodium sky glow but now I have a broad-spectrum light that floods the garden.  Imaging with either of the telescopes the performance is not great because of the light pollution.

Much earlier this year I performed a number of tests piggy-backing my Modified DSLR camera which now has a CLS-Clip filter to the ETX105 and I was very surprised with the results.

So last Friday the AstroTrac arrived and I must say I am very impressed.  The build quality is fantastic and setting up could not be easier.  Polar aligning is a very simple and quick process, upon looking through the polar scope you are presented with an illuminated reticule which can be dimmed if required. 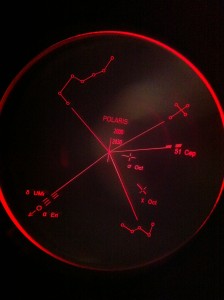 I have carried out some very brief tests however with rain forecast I decided to only take a few images.  I look forward to our hopefully clear winter months where now I may finally be able to get some fantastic imaging done.

Last night I managed to test my new CLS-CCD EOS clip filter on my modded 350D.

With a fantastically clear sky although pretty well moon lit I setup my ETX105EC which I piggybacked the 350D to.  The ETX105 does not serve itself well to imaging deep sky objects because of its very slow optics being f/14 however the setup is ideal for guiding and imaging with something else.  This time I did not do any guiding  as I wanted to see what length of exposure I could get without.  Attached to the 350D I had the 50mm f/1.8 prime lens which I stopped down to f/7.1.  I discovered that I could easily capture 3min exposures at ISO 400 with no trailing at all,  the low ISO was chosen as I wanted less sensor noise created from the higher gain of ISO 800 & 1600.

In this image you can clearly see the North America Nebula and also a very small Cresent Nebula.

The Image is a composite of 9 x 3 minute subs with dark, flat and bias frames these were calibrated and stacked in Maxim and after a little stretching in Photoshop this is my very satisfying result. 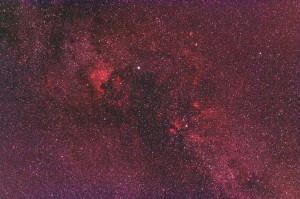 A quick look at Cygnus

Around these parts we have been suffering with a lot of cloud and patch clear skies.  I took the chance to have a brief play pointing my camera at Cygnus using a 28mm M42 lens with a CLS filter attached to the rear. Today because of the unpredictable skies I only used my Static tripod and took 12 30 second subs along with a flat and dark. Stacked using Deep Sky Stacker and a small amount of stretching.  I am not going to do much more to this image as it was only a test I will take alot more time, care and attention with the guided images. 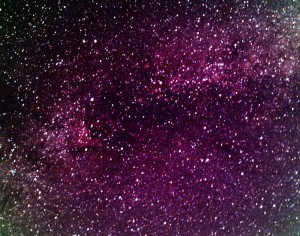 Well it has to be said I am quite pleased with how everything went tonight. The equipment behaved well although I do need to make a small modification to the scope to allow the dec to take the weight of the camera and lens.

I am not that pleased with the optical quality of the lens I used tonight but it still allowed me to see the result of how the guiding setup worked. All the equipment however behaved like a dream.

Light pollution is an issue however I should be able to get around this using some better filters.

Now I have the task of cleaning the rather filthy sensor on my camera. I knew this was going to be an issue but I was not using tonight to make amazing images, that is going to have to come with time and quite a bit of practice using this very basic imaging setup.

Recently I have spent a little time getting a basic imaging setup sorted out so that I am able to use one of my smaller telescopes as a guide scope for when I wish to image using my modified Canon 350D for wide field imaging using only camera lenses.

Tonight is going to be a particularly interesting first attempt as recently alot of the street lighting has been changed to the new apparently low emission lighting around Woolston, also the Itchen Bridge has only just commissioned it’s new lighting which is from what I believe to be a low energy blue led light. Usually when looking toward the direction of the bridge although I can’t actually see the bridge from my back garden you can see the typical sodium glow, last night I looked to see what the difference is and I could see nothing no glow whatsoever.

Tonight is the first clear night in a long time and with no moon as such I thought it definitely worth while giving my new imaging setup a go.

I will be back later with hopefully some promising results I don’t really want to moan at the council and tell them they have made the night sky worse than it was.

First thing this morning I made a visit to the New Forest Observatory (NFO) which is operated my Prof. Greg Parker.  This was for a Party being held there to celebrate the first light of the new mini-wasp observatory setup.  This is quite an impressive piece of equipment which comprises of a Paramount ME mounted upon a Bespoke Aluminium pier which is bolted rather well to a massive Concrete block sunk into the ground.  All of this is housed within a new Pulsar Observatory which has 2 side pods for additional storage and computer equipment which is required to control everything.  At the business end of the Mount are 2 Takahashi Sky 90’s which are used for the imaging along with a guide scope plus an additional refractor which can be seen that has an eyepiece.

The Dome as it comes has no way of automatically rotating the Dome to the correct position for imaging, this led Tom from Curdridge Observatory design and build an automated dome controller which parts of can be seen in my previous post.

There are still a few odds and ends that need to be done to finish the observatory, some simple and some not so simple however I am sure these will not be a challenge to Greg, Tom and Myself 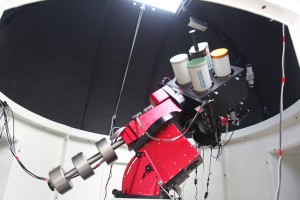 I am sure that in no time at all Greg is going to be producing some amazing images from this fantastic setup.