Wiring up a Dome Rotator for The New Forest Observatory 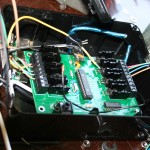 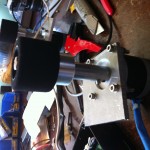 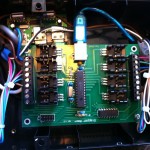 Today was an interesting day spent at Curdridge Observatory where Tom has been designing and building a Dome Rotator for Greg’s new dome at The New Forest Observatory, the system that is to be computer controlled will allow the dome to automatically rotate to allow the opening in the dome to be in the correct position in relation to the alignment of the mount during times of observation and imaging using the new WASP imaging system which is mounted on a Paramount ME.  The system is based around 2 stepper motors which have neoprene rubber drive wheels which will pinch against a track on the dome, these are controlled by a Microchip PIC microcontroller which is instructed via USB using Tom’s bespoke dome controller software using the ASCOM instruction set. Here are a couple of images of before after and one of the motors.

LX200 gets a dusting off at the Curdridge Observatory

Time has passed and it is to say the least early 2011…. Time passes very quickly….. The observatory construction plans have somewhat been delayed due to two main factors 1 being poor weather for building a decent structure and 2 lack of expendable cash for materials. In the next few weeks I hope to resolve the financial side of things. However I have been imaging using the 350D Astro modded camera. I must admit I am very happy with the results and I will be uploading my processed images tomorrow.

I do need to do a couple of things to my basic setup 1 being a crayford style micro-focusser and the second a par focal focus / guide camera for long exposures over 30 seconds.

I will control the 350D using a USB controlled microcontroller so that I can do bulb exposures over 30 seconds.

Right I have images to process so I will get back to this tomorrow.

Over the past couple of months I have been designing a tracking mount that will allow me to attach my DSLR to my standard camera tripod allowing my camera to track objects at a precise sidereal rate.

Initially my original design was only going to drive the mount at sidereal rate and occupy 1 microcontroller. Unfortunately I soon discovered a couple of problems, one of which when I started to use interrupts to allow me to start and stop the mount at any point during its travel caused the motor to have an annoying tick every rotation which transmitted itself into the mount causing vibration, the other problem was that I was having to program lots of delays into my code to allow the display to reflect accurately what was happening and what the operator could do.   I spend a fair amount of time working on how the Stepper Motor was going to be driven; the motor I am using has a 1.9degree per step resolution giving the motor 200 steps per revolution, although this sounds a lot because the motor rotates relatively slow this can cause vibration between steps, I spent some time figuring out a simple method that would allow me to micro step the motor and ended up writing my own library file.  My Library file allows me to micro step the motor to a resolution of 16 PWM micro steps to 1 motor step, I also added some code to tell the motor to rotate at a specific RPM.

Maths:  Okay so there are 24 hours per day, 1440 minutes per day and 86400 seconds per day.  But these numbers are of no use as that is a Calendar day.  The rotation of the Earth is very slightly quicker. Our sidereal day is actually 23.93446972 hours long; this gives us 1436.068183 minutes per day and 86164.09098 seconds per day.  You may be thinking why does this affect us? Well if you are performing exposures that may run for several hours the last thing that you want to see on an exposure that has been running for a couple of hours is star trails.  When you build your mount you measure everything very precisely and with the numbers above you can work out exactly how far you need your motor to drive the mount per minute or second.

I am adding a Lunar tracking rate to the mount and in time I will also have a Guiding facility.

I will be providing pictures of my Prototype mount and some of the results I have achieved in the next couple of weeks.  Providing I am able to get a nice clear night 🙂

Well I appear to be getting lots done this evening and I have even managed to get the iPhone app up and running 🙂 this will make being able to make blog updates very simple.

Well I will be honest nothing has gone to plan for me due to a number of things.  Weather, funds and a distinct lack of dry days plus a few other commitments.

I have managed to spend some time designing a mount for DSLR cameras which allows the camera to track the night sky I hope to have the mount construction completed in the next following weeks. Photograps coming soon 🙂

Okay I have not managed to get any further with the building part of the Observatory but I have not been sat about not doing anything.  I have found a suitable computer to run all the hardware in the Obs, also I have a UPS supply for that just in case situation.  The only hardware I need to locate is a Flat screen monitor.  I have found a Weather application for my blog but at this moment in time I am not sure how it works, I am sure I will fathom that out in time.

I am going to draw up some plans in the next day which I will obviously post on here for all to see.

Day1 Getting ready to build Observatory for Meade LX200

Today is the first day in a very long time that I have managed to get the LX200 Classic 10” out of its protective case in the workshop.  This is due to a number of factors, which I won’t bore you with right now.  Let us just say that much has happened and I have not been entirely focussed on my astronomy, which is quite a shame having such a decent scope.   Thankfully I managed to fully test the mount and I was pleasantly surprised to see that the clock was accurate to within 10 seconds.  This is quite impressive considering that it had not been powered up for nearly 2 years.

I used to observe a lot with my good friend, Tom, of The Curdridge Observatory and I had quite a bit to do with the construction of the observatory on many different levels.  As Tom has a permanent observatory setup, he has become somewhat of an expert in imaging, guiding and also designing/engineering and building his own EQ mount…..amongst other things.  However, you have to be a little careful because when he gets excited about something you do need to slow him down a little and say NO from time to time, a trait which I’m all too familiar with.

Getting back into astronomy can cause you to make a very long list especially, when you have not built your observatory yet! Here we go for starters: